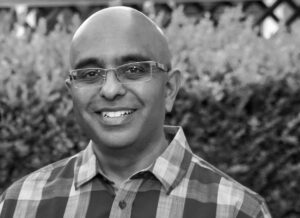 Ashok N. Srivastava, Ph.D. is the Senior Vice President and Chief Data Officer at Intuit. He is responsible for setting the vision and direction for AI and Data across Intuit to power prosperity across the world. He is an Adjunct Professor at Stanford and a member of the Board of Directors of the University of Colorado Foundation.  Ashok is a Fellow of the IEEE, the American Association for the Advancement of Science (AAAS), and the American Institute of Aeronautics and Astronautics (AIAA).

Previously, he was the VP of Big Data and Artificial Intelligence Systems and the Chief Data Scientist at Verizon.  His global team focused on building new revenue-generating products and services powered by big data and artificial intelligence.  He was also the Editor-in-Chief of the AIAA Journal of Aerospace Information Systems.

At NASA, he led advanced technology programs in Aerospace, Space Systems, and Earth and Space Sciences including the System-wide Safety and Assurance Technology and the Integrated Vehicle Health Management programs.  He served as a Venture Advisor focusing on big-data analytics at Trident Capital, and was on the advisory board of several startups.

Ashok is the author of over 100 research articles in data mining, machine learning, and text mining, and has edited four books in these subjects:  Text Mining: Classification, Clustering, and Applications, Advances in Machine Learning and Data Mining for Astronomy,  Machine Learning for Engineering Systems Health Management, and Large-Scale Machine Learning in the Earth Sciences.

He has over 30 patents awarded and several under file. He has won numerous awards including the IEEE Computer Society Technical Achievement Award for “pioneering contributions to intelligent information systems,” the NASA Exceptional Achievement Medal for contributions to state-of-the-art data mining and analysis, the NASA Honor Award for Outstanding Leadership, the NASA Distinguished Performance Award, several NASA Group Achievement Awards, the Distinguished Engineering Alumni Award from UC Boulder, the IBM Golden Circle Award, and the Department of Education Merit Fellowship.

The best way to contact Ashok is through email at ashok22 at hotmail.com.

Iconic One Theme | Powered by Wordpress